“I love when the ‘literary establishment’ ‘discovers’ fantasy” tweeted @DelReySpectra, the American genre publishers, yesterday, linking to an article in the New Yorker.

The article in question, The Dragon’s Egg – high fantasy for young adults was a very well-written piece, articulate and full of gentle humour, so I can see why Adam Gopnik has won the National Magazine Award for his essays, but by the time I got to the end of it I was left with a somewhat bitter aftertaste: a distinct impression that he thinks *all* fantasy is for young adults.

The books with which he chose to illustrate his piece were Lord of the Rings, the Twilight saga, and the Inheritance Cycle. You could almost see the labels “enduring classic”, “for girls” and “for boys” floating over them, saying look at me, look at how balanced I’m being.

I can understand his choices: Lord of the Rings is pretty much guaranteed to be a recognisable name. It’s high fantasy, but I wouldn’t classify it as YA, which was the thrust of his essay. LOTR is too big, too dense, too meandering for today’s average young adult reader: too little happens for far too much of the time, and not even the most rabid Tolkien fan could characterise it as pacy. I admit, I was a young adult when I first read it, but by then I’d already read (by choice!) Beowulf, The Iliad and The Odyssey, so I was not your typical 11 year old.

Stephenie Meyer’s Twilight and Christopher Paolini’s Inheritance Cycle are undoubtedly aimed at teens (the latter having been written by one, to boot – it’s also the only one that really fits a definition of YA high fantasy) and Gopnik’s analysis of at least part of their appeal is pretty much spot on:

This is how the Bellas of the world actually experience their lives, torn between the cool, sensitive boy from the strange, affluent family and the dishy athletic boy from across the tracks. It’s “My So-Called Life,” with fangs and fur.

he said of Twilight, although I think he’s stretching it to call a PG paranormal romance “high fantasy”. Of Paolini he says:

Adolescent boys, of the kind who take up books in the first place these days, already experience their lives as a series of ordeals: tests, in every sense. . . which aim only at preparing him for the next series of ordeals: this is the story of their life.

Gopnik clearly recognises the publishing phenomena that Twilight and the Inheritance Cycle have become – he points gleefully to the fact that the final instalment of the latter had a print run of over two million copies. But equally clearly, he doesn’t think they are very well written: Stephenie Meyer is “an awkward writer with little feeling for construction” and Paolini is “an unskilled narrator and a derivative mythmaker.”

Take those comments in isolation and he has a fair point; the magic of neither series is in the technicalities of its execution. But bearing these examples and those comments in mind, and reading the essay as a whole, the implication is that Gopnik believes *all* fantasy is poorly-written, derivative or backward-looking, bereft of psychological depth or realism–

What substitutes for psychology in Tolkien and his followers, and keeps the stories from seeming barrenly external, is what preceded psychology in epic literature: an overwhelming sense of history and, with it, a sense of loss. The constant evocation of lost or fading glory—Númenor has fallen, the elves are leaving Middle-earth—does the emotional work that mixed-up minds do in realist fiction.

and comparable to video games—

The gratification comes from the kid’s ability to master the symbols and myths of the saga, as with those eighty-level video games, rather than from the simple absorption of narrative

But that wasn’t the only thing that made me wince. He also uses the phrase

even someone susceptible to almost every kind of fantasy

as if it’s not the fantasy reader’s fault that they like this kind of thing; they’re susceptible to it, the poor dears, as if it was a genetic defect like fallen arches or a predisposition to diabetes.

To be fair to him, Gopnik makes some good points that fantasy helps kids learn, organize and master the myths and symbols of these sagas as tools to get to grips with school and growing up. Except he made them whilst also pointing out that Paolini’s titular hero Eragon learns to be a dragon rider but never grows to be a man, and thus reinforces the tired old condescension that fantasy – any fantasy – is just for kids:

By the time they’re ready for college-admissions letters, they’re already dragon riders, if not yet grownups.

And then he invites us all to mock this “mere mock history”.

His final argument is both cogent and compelling, but by then he’d lost me, and no amount of gentle humour was going to win me back. By selecting the examples he did, then picking holes in them for their so-so writing, impenetrable dullness or derivative plots, and highlighting as their strengths only their relevance to teens’ lives, Gopnik leaves the reader to conclude that if these are the biggest sellers¹, the rest of the genre must also be like this – only somehow worse, because they didn’t sell as well.

And by making sound points about what fantasy can teach in the same paragraph as references to the childhood lessons of how to hold a knife (which most of us mastered before we started primary school) and learning right from wrong (which most of us have got to grips with well before we hit our teens) he again implies that these are lessons for juveniles, ones that grown-ups have already learned.

Pardon me whilst I splutter.

Tell George RR Martin he’s writing books for kids – it can’t have been all the nudity, incest and beheadings that meant the HBO series A Game of Thrones was shown after the 9pm watershed with a warning about adult themes. 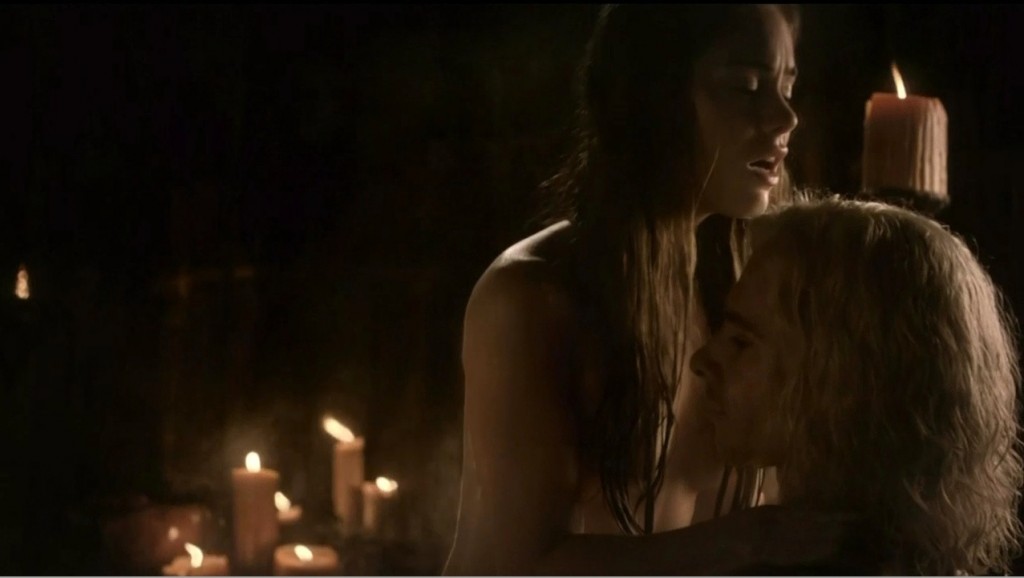 Tell me that kids get all the jokes in Terry Pratchett’s books – yeah, even the Heisenberg Uncertainty Principle one. I’m pretty sure they teach quantum mechanics at middle school these days.

I could go on about the nonverbal communication in Daniel Abraham’s Long Price Quartet, or Joe Abercombie’s The Heroes as “an indictment of war and the duplicity that corrupts men striving for total power” (Eric Brown, The Guardian). Just for kids? Seriously?

There is more to fantasy than vampires and werewolves, elves and dwarfs, whatever the intended demographic. If he’d picked more representative example texts instead of just the most visible ones – hell, even read around his subject a bit – Gopnik would know that. Instead all he showed was his beautifully-articulated prejudices.

¹And why only select the biggest sellers? Why not select The Hunger Games, or Artemis Fowl? The Forest of Hands and Teeth or A Wizard of Earthsea? OK, they’re not high fantasy,  but that didn’t stop him picking Twilight. Could it be that Adam Gopnik actually doesn’t know much about YA fantasy and is only looking at the bestseller list? For shame. Commercial success has never been a metric for literary merit – occasionally they intersect (Hilary Mantel, Wolf Hall: sold over 600,000 copies in 2010, and won the Booker); usually, they don’t (Dan Brown, The Da Vinci Code: sold by the shedload, and, erm, didn’t).