The cutting edge of fantasy fiction?

Authors of fiction should wear their learning lightly, I feel. Research should subtly inform their writing, not dominate it, and the reader should never, ever feel as if they’re being lectured. After all, they picked up the book to be entertained and transported into another world, not sat down and told to pay attention, because there’s a quiz later.

It’s a widely-held view that fantasy as a genre is one in which the writer can pretty much dispense with research. It’s all made up, so as long as you make sure there are certain natural laws by which your world functions and you stick to them, you can do what you like. It’s your sandpit. You make the rules. 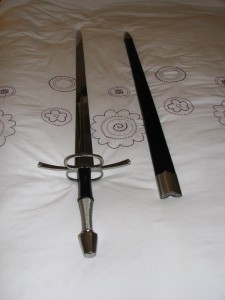 Except it’s not that simple. Even in fantasy, there are some elements where a little research will prevent your reader frowning and thinking “That’s not right.” I mean, they might write to you and complain.

For example, there’s likely to be horses in the book somewhere, so it pays to know the hairy end from the end with the teeth. How to get on and off. How far you can ride one in a day.

If the blokes on the horses are knights, you’d better know your hauberk from your pauldron, and where to find the vamplate (it’s the bit which guards your hand as you grip your lance, in case you didn’t know).

So I was sitting at my desk, putting the finishing touches to the second book of The Wild Hunt series, and I had a sudden thought. An epiphany, even. One of those moments of realisation which is often—nay, almost inevitably—followed by “Oh, shit.”

What I realised was that I have spent mumblety-mumble years thinking, dreaming and writing about folk for whom a sword is a part of everyday life, and I’ve never laid hands on one. Seen a few in museums and so on, but never actually wrapped my hand round a hilt.

My imagination’s done the work up to this point. I knew not to pick it up by the pointy end, for instance, and was fairly confident I could score at least 6/10 on a naming-of-the-parts pop quiz. I also knew that they don’t weigh nearly as much as people imagine, but even three pounds is going to feel like it’s ripping your arm out of its socket after half an hour’s earnest use.

So I bought one. A replica of a 15th century longsword (also called a hand-and-a-half, or a bastard sword, depending on your era of origin and local preference). Not a lightweight copy of Andúril that comes with a fancy plaque to hang on the wall, but a traditionally-made, full tang, edge-ready, functional sword. And it’s sharp.

Well, I’m not going to know what a real sword feels like in my hand unless I’m holding a real sword, am I?

Apologies for the crummy pics–it’s pouring with rain and even with the lights on I can barely see what I’m doing. Click to make them bigger. 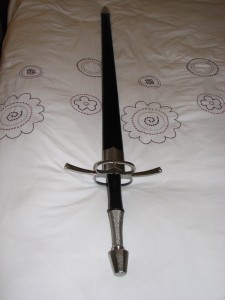 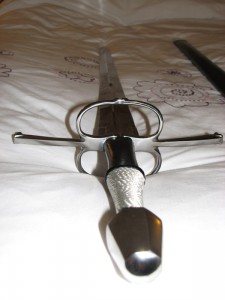