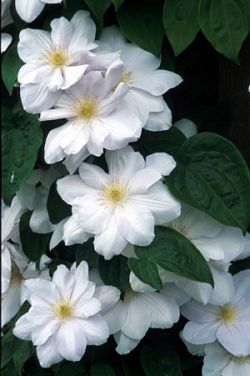 There’s a clematis at the bottom of my garden.  A vigorous, large-leaved, free-flowering variety called Madame Le Coultre, which produces glorious paper-white flowers the size of tea-plates, in great abundance, every year, in spite of–or possibly because of–my sporadic attentions.  Like this one.

This morning, I discovered that Mme had fallen under her own weight, and was drooping forlornly into the hellebores.  I say “fallen under her own weight” because I wouldn’t dream of implying that my neighbours had pitched her back over when she scrambled clean up the 6ft dividing fence and made determined advances on their trellis, rather like a dark green, many-armed Napoleon across Europe.

Besides, I planted Mme nine years ago; she’s been here longer than they have lived in that house, so I reckon that gives her dibs on the fence.

So now I have to untangle the 8-10ft long stems and somehow tie them in to the acres of clematis netting I provided for Mme, which she has studiously ignored thus far.  As anyone who has ever grown a clematis will know, they are largely self-supporting.  This means they will grab onto and coil round whatever they touch; in Mme’s case, this is usually herself.

Picture the scene, if you will.  Yours truly, unsteady of foot at the best of times, waist-deep in hellebores and flag iris behind the pond (yes, that pond), attempting to untangle this monstrosity without snapping too many bud-bearing shoots.  It’s like trying to knit a Fair Isle sweater without a pattern.  In the dark.  In reverse.

However, I’ve managed to achieve some sort of order.  Mme’s many armies have been separated and espalier-trained across the aforementioned acres of netting.  Casualties were limited to one finger (a Swiss Army knife related injury) and one leading shoot, that is now hospitalised in a jam-jar of water on the kitchen windowsill in the hope it may root as a cutting for next year.

Even though I know full well what I am nurturing, I can’t bear not to give it a chance.  Where the hell I’m going to plant it, though, I do not know–give Mme free reign and she’ll annexe Poland before she’s three years old.