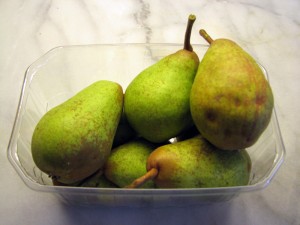 I harvested the first pears yesterday and today: Williams Bon Chrétien; the Conference ones on the other tree aren’t quite ready to come away, although I suspect today’s high winds may have a say in that matter. I see pear and almond crumble in my future!

It’s taken seven years from planting for the Williams to mature enough to fruit – there is some truth in the old saying ‘pears for heirs’. In previous years we’ve had plenty of blossom but that’s been it. The Conference crops heavily in alternate summers; this is its third ‘on’ year and the fruit is so heavy the lower branches are barely inches from the ground. This making it somewhat awkward to reach the shed . . .