I gave myself some time off over the holidays. As any writer will tell you, the holidays are an opportunity to get so much writing done, have this manuscript knocked into shape in no time. And then, well, The Holidays happen. There’s late nights and lie-ins and family stuff and all that delicious food won’t eat itself, right?

Anyway, I gave myself a pass, and promised I wouldn’t beat myself up if I didn’t get much done for a couple of weeks. Instead I would use the time to rest, recharge and refocus, so I could come out swinging in 2018.

First up, an update on where things stand with THE DRAGON HOUSE.

The headline figure is 120,000 words (so far) on what I hope is the final draft of the book. This is not the end, because I am re-re-re-x10n-writing the last act after realising I’d made a huge misstep. I thought I could write my way out of them, but it turns out I couldn’t, and I should have stopped trying some time ago. Sometimes it really is better to just accept you’ve goofed, tear it down and start again from a firm foundation.

Speaking of which, this 120k is pretty solid, I think. It’s the result of some tough love from my agent, a lot of work and me being in a better headspace. These last few years have not been great but I’ve said all I want to say about that for now.

So, 120k and moving forward. Beta-readers say it holds together, so all that remains is to take a deep breath, and nail the dismount. Wish me luck.

A note on process and progress

Some authors like to post progress meters or word-count totals for the books they are writing. If this works for them to inform their readers and hold themselves to account as deadlines approach, more power to them. That doesn’t work for me. I don’t like (and instinctively mistrust) raw word count alone as a metric for measuring my own progress.

Regular readers will know that my writing process is best described as organic, even free-range. It’s messy. There’s no formula or road map to get to the end, and the only GPS stands for Gut Plotting System. I tend to find out what my books are about by writing them. I also edit as I go, pruning and filling as needed. As the shape of the story comes into focus, I get a better idea of how much more work is required to adjust the lens, as it were.

Not all of this adjustment equals more words, of course. It might mean I need less, or a bit of both. It’s fluid. I do a lot of writing/editing by feel, which is why a hard, arbitrary figure like 186,048/200,000 is not a meaningful measure of progress to me. Nor is crossing things off lists, much as I like doing that. I’m not even disciplined enough to stick to a drafting schedule, except for the last one, where it counts.

So my writing process is linear, until it’s not. My word and character choices are deliberate, until they become instinctive. I know where I’m going but still surprise myself along the way. And I know that I’m done when I get there, because when it’s ready the work sings.

I never said it was a *good* process, did I? 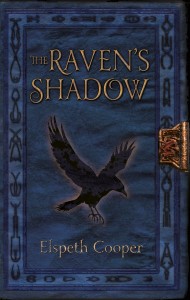 My lords, gentlepersons and other sentient beings, I give you THE RAVEN’S SHADOW, Book 3 of The Wild Hunt.

This will be arriving on your bookstore shelves on August 15th, in hardcover and trade paperback, so get your pre-orders in, if you haven’t already.

The artwork is once again by Dominic Harman, and continues the book-covers-that-look-like-books theme. Click the image for a larger version. Striking, isn’t it?

Now, you all remember where we left things at the end of TRINITY RISING, yes? Teia struggling through the mountains to avert a disaster only she can see? Gair in mortal peril in El Maqqam? Splendid.

In this book we return to the mainland as the Nimrothi war band advances southwards through the Archen Mountains, bent on reclaiming their ancient homeland with the help of Maegern the Raven, Keeper of the Dead. Under a trinity moon, battle will be joined. Ytha and her war band, forty thousand strong, versus a scant legion of imperial infantry, a handful of Arennorian clansmen, and one damaged gaeden with nothing left to lose.