Funny things happen over the course of a novel’s gestation, especially if you’re a writer like me who has a very free-range, organic approach to the whole business. Sometimes it’s only obvious quite far down the line that the book you thought you were writing isn’t actually what’s coming out of your pen. Keyboard. Whatever.

I had a moment of clarity during the final edit before I submitted Songs of the Earth for publication. I realised that a significant character arc didn’t belong there, it actually belonged in the next book. I removed it, and the rest of the script pinged into shape, tighter and better balanced than it had been before.

Something similar occurred during the protracted revisions of Book 2 of The Wild Hunt, and I realised that the reason I was struggling to make part of it fit was because it, too, belonged in the next book. 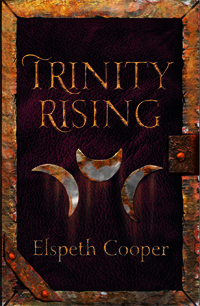 Now I’m a pretty good multi-tasker, but let me tell you, it’s not easy writing two books in a big fat fantasy series at once – especially if you don’t realise that’s what you’re doing. Kudos to anyone who can manage it, but it nearly turned me into a wreck. It also didn’t help matters that I’d been a bit poorly for quite a lot of the time.

Anyway, the upshot of the matter is that I’ve had to make a change or two, starting with the title. Trinity Moon is no more. All hail Trinity Rising, coming to a bookshop near you in the middle of July. Click the picture to embiggen.

This has had a knock-on effect on Book 3, because all that material that I didn’t know was missing now needs to be accommodated. I’m dealing with that now, and by crikey it’s shaping up well, even if I do say so myself.