Cooper Towers is under attack.

The enemy has taken control of the shed, and advance scouts have been making daring daylight raids across the patio for several days.   They wear no uniform, operating in plain-clothes, the better to blend in with the civilian population.   Modern defensive strategy is useless against this new insurgency.

Day 1: Elite operatives spotted setting up observation posts at high points around the garden.  Utilising local cover, the enemy scaled the feeder pole and dropped onto the seed tray.  After approximately 28 minutes, he base-jumped into the choisya bush and made good his escape.  Enemy tentatively identified as apodemus sylvaticus. 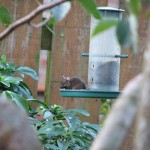 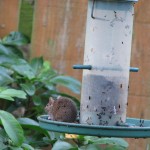 Day 2: The shed was taken, under cover of darkness.  Shed door frame shows signs of forcible entry.  No casualties except a 12.5kg sack of premium wild bird food.  Moved all provisions out of reach to force the insurgents to break cover in search of supplies.  Observed two low-level raiders at close quarters.  Stalemate.

Day 3: Aha!  They’re getting a bit cocky.  They’d established their barracks in a disused nestbox, and the guard let himself be seen.  I grabbed the box and removed it, but not quite quickly enough.  One of the enemy escaped via a daring leap onto the shelving unit, where he hid behind the hosepipe and watched as his two comrades were escorted out of the combat zone.  I have designated this particularly audacious combatant “Steve McQueen”.

Day 4: Requested reinforcements.  HQ sent in a highly-trained Counter-terrorist Assault Technician (CAT) which performed a thorough sweep of the combat zone, but the enemy was lying low.  No sightings reported.  CAT redeployed to other duties.

Day 5: All quiet on the western front.  No sightings, but picked up some high-frequency communications chatter.  Cryptographers are having no luck decoding it.

Day 6 (am): I opened the shed door this morning and noted that all traces of bird food on the floor had vanished, indicating that Agent McQueen is still at large.  Reconnaissance of the upper shelves found the little bugger sitting atop my gardening gloves watching me.  The enemy’s audacity is breathtaking.  Lightly armed and agile, they are superb edificeers, shinning up the wall ribs like lumberjacks up a Douglas fir.

Day 6 (pm): It is time to take the battle to the enemy.  I have formulated a Cunning Plan, a masterpiece of Baldrickian subtlety, which hinges on the enemy’s affinity for holes.  I have reinstated the nestbox, and this time I will place my hand over the hole when I remove it.  Take that, Steve McQueen!