Two weeks after chopping in the bikes against a nice, sensible car* and my husband was getting twitchy.

By March, the days were getting longer, the sun was coming out… you can tell where this is going.  He wanted another bike.  The “garage vacuum” was pulling *hard*.

So he’s bought a BMW F800GS.  Not the big Ewan-and-Charley one, but its baby brother.  Tall, aggressively-beaked, looks from the front like Sir Patrick “The Sky at Night” Moore with his monocle: 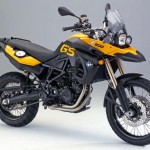 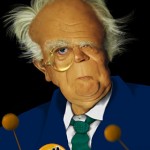 Two weeks.  I thought he was made of sterner stuff than that.

* He originally wanted a 4-door Jeep Wrangler but when I tried climbing into one in the showroom and found the ascent required oxygen and a team of Sherpas, and the descent required my beloved’s assistance lest I measure my length on the floor, that idea was quickly canned.