The curtains are drawn, cloaking the litter and countless half-drunk cups of tea in shadow. A dishevelled figure crouches over a laptop, face unhealthily pale in the glow from the screen.

Observe the WRITER in its den. Here it makes a nest of crumpled
paper and pencils, in which it will incubate its precious egg for a
period of up to a year. So attentive is its parenting – some would say
obsessive – that the writer rarely emerges from its cave. When it
does, it is easily confused by bright lights and sudden sounds.

The doorbell sounds. The writer’s head jerks up, its ears twitching. After a moment the bell rings again, followed by knocking on the door.

The knocking continues. The writer gets to its feet as if it hasn’t moved in days, and shambles to the door. On the way it scratches its unkempt fur, dislodging biscuit crumbs and the occasional pencil. At the end of the hall it hesitates, squinting in the uncomfortably bright light.

An indistinct figure in a bright red coat can be seen through the front door glass.

Got a parcel here you need to sign for.

Writers are shy, introspective creatures at the best of times. During the
prolonged incubation period they often seem to lose the social skills
required to successfully interact with other creatures. Their attention is
so focused on their offspring that they frequently neglect their own
grooming and their diet deteriorates to subsistence level, scavenging
junk and whatever uneaten food they find lying about the den.

The writer scuttles to the door, avoiding the patch of sunlight on the carpet as if afraid it will burn. After fumbling with the key, it manages to unlock the door and open it just wide enough to peer out.

Parcel? To sign for? You’ll have to open the door a bit wider, love.
It’s quite large.

A brown cardboard box appears in shot, just visible through the gap in the door. The writer looks around nervously, cringing at the passing cars. Instead of the large box, the postman proffers a smaller one with a screen set into the top, and a dangling stylus attached.

The writer fumbles for the stylus and scrawls a crude symbol on the screen.

POSTMAN
(pushing the larger box towards the door with his foot)

There you go then. Early Christmas present, eh?

The postman holds out his hand for the data terminal. The writer stares at it, nonplussed.

A particularly large furniture delivery van drives past, belching diesel fumes. Panicked by the noise, the writer flings the data terminal at the postman, and claws the parcel inside. The door slams in the postman’s face.

The writer falls to its knees, pawing at the cardboard.

My bookses. Mine. My own.

Singing happily to itself, the writer retreats to its nest with its treasure.
The precious author copies will be placed in the shrine at the back of
the den, and the box and packing materials added to the the creature’s
bedding to keep it snug through the long weeks to come until eventually,
a new book is born. 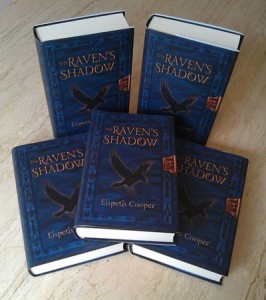