Hey, guess what? Songs of the Earth got a mention in the Sunday Times!

Unfortunately, that mention turned out to be little more than a single line of internal dialogue quoted out of context†, with the admonition that lines like that aren’t going to do anything to make fantasy cool.

Um, what? Who says a particular genre of fiction is cool or uncool? Is there a Department of Cool somewhere in the bowels of the Home Office that makes these distinctions? Do I have to apply to them in triplicate for an EC Certificate of Cool Conformity before I’m allowed to write books? 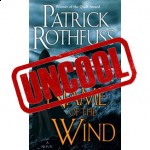 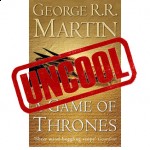 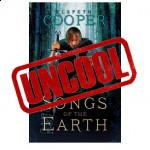 As a reader and writer of the genre, I already believe fantasy is pretty bloody cool, thank you very much. Where else can I get to play with kingdoms all day long, and weird beasts (come on, dragons? Could they be any cooler?), and sharp, pointy weapons. Just because there’s a castle on the horizon, or we’re in some fantastical city run by thieves doesn’t mean the writer can’t examine the human condition just as deeply as anyone else – in fact fantasy writers often get to examine it from new and exciting perspectives, like the inside, amongst the tubes and wobbly bits.

Maybe I’m reading too much into a couple of sentences in a review round-up. Maybe the reviewer was not approaching from a standpoint of “I already think fantasy is deeply uncool and slightly icky, so go on, try to change my mind”. Or maybe I’ve just heard one too many people sneering at fantasy lately, because, you know, it’s all just made up stuff.

Newsflash, people: all fiction is ‘just made up stuff’. Even the kind of fiction that wins the Booker.††

It’s not my job to try to make fantasy cool to people with attitudes like that. Prejudice is their problem, not mine.

It is my job to serve the story, to tell it to the best of my ability, and transport the reader somewhere else for a few hours. My job is to entertain with words. If I happen to also inform, elucidate, illuminate or otherwise make the reader say “Huh, I didn’t know that”, then that’s just gravy.

So here’s my book. Try it, don’t try it, it’s your choice. But why not forget what all the other cool kids are doing, stop trying to be so achingly hip you can barely walk, and make your own mind up for a change. Try some fantasy; it won’t kill you. It’s rousing, riotous, heroic, horrifying, absorbing, philosophical, thrilling, heartbreaking, edge-of-your-seat fun.†††

Hell, you might even get over yourself and enjoy it.

Or is it better to be seen to be cool than be entertained?

† I’m not saying it was the best line in the world, but in context it was appropriate, dramatic and effective. Stripped of context, pretty much any ten words (short of Shakespeare) are just words.

††† Not necessarily all at the same time. Obviously. But some books, like Martin and Rothfuss there, will give it a damn good try.

An addition to the family

My left foot – the war continues